Retroposon p-SINE1 is a SINE (Short INterspersed Element) of 122 base pairs in average, and is dispersed in the rice genome with high copy numbers. The presence-or-absence of SINE in each loci of the chromosomes is a reliable molecular marker for the phylogenetic analysis because SINE is never excised from the genome after insertion (Ohtsubo et al., 2004).

“SINE Code” is a (1, 0)-code based on the insertion polymorphism of SINE, and is designed for the classification of Oryza species The insertion polymorphism ofp-SINE1 markers at several loci is encoded to a numeric sequence of 1 (presence; +) and 0 (absence; -) for each accession. Presence-or-absence of each p-SINE1 is examined by the size of the product of genomic PCR using pairs of primers that hybridize to the flanking sequences at both sides of the p-SINE1 sequence ( Fig. 1 ).

“AA-genome code” is a SINE Code to categorize the core accessions into species, which is described below. Other types of the SINE Codes will also be issued to determine the genome type of the distantly-related rice accessions, as well as to classify ecotypes within a specific species, such as Oryza rufipogon (Cheng et al., 2003 ; Xu et al., 2005b).

“AA genome code” is a six-digit SINE Code that begins with “AA” to categorize the AA genome-type accessions into species.
Presence or absence of the p-SINE1 insertion at the six marker loci (Cheng et al 2002) is examined by PCR,and is encoded to a numeric sequence of 1 (presence; +) and 0 (absence; -) for each accession. (Fig. 2) .
Information on the PCR primers is provided in (Appendix 1) .The names of the species deduced from each SINE Code are shown in (Table 1). 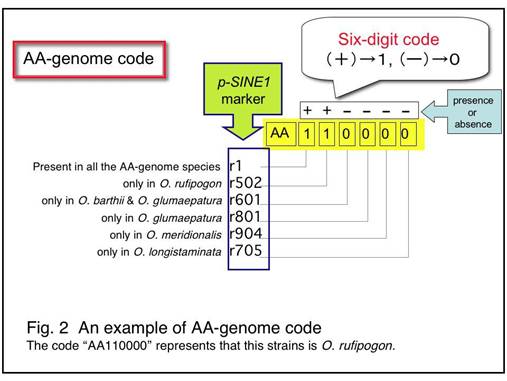 The core accessions of the AA genome-type were examined for insertion polymorphism of p-SINE1 markers, and were categorized into species by AA-genome code (Cheng et al 2002 ; Xu et al., 2005a). Genomic DNA extracted from the strains preserved in the National Institute of Genetics was used as templates of PCR.

Part of the results are shown in (Table 2) below. For example, W0106 was coded as “AA110000”, an therefore categorized as O. rufipogon. This agrees with the former characterization. The AA-genome code of each accession is shown in the pages of “Strain Detail”. Detailed results of all the core accessions of the AA-genome-type are in ( Appendix 2).

If the species name was changed according to the AA-genome code, a “determined by SINE code” notice will be added to the “Species” column in the “Strains Detail” page. When data was not obtained because of the failure of PCR amplification or other reasons, “*” was used in the code (i.e., *01000). Four accessions in Rank2 and Rank3 (W0747, W1646, W0180, W1420) include “*” in their codes, but it did not affect the categorization of any of the accessions.